Here at Enter the Bunker we love cold war history.

When you work in an historic nuclear facility, it’s hard not to be impressed by the feats of engineering that went into creating a fallout shelter, or the stark meaning behind its presence on Canadian soil. The Cold War was an era during which people lived in constant fear of nuclear annihilation. Children in school were walked through duck-and-cover drills by a cartoon turtle in the hopes that the shelter of a simple school desk would be enough to save a few of them from the intense radioactive blast of an atom or hydrogen bomb. It was a darker time, when people kept underground shelters stocked with food and water out of fear that, at any moment, the war could begin in earnest.

Thankfully that never happened. Although the USA and USSR participated in a number of proxy wars (wars fought through other nations, such as the Vietnam War, with each superpower backing a different side), neither took direct aggressive action against the other. And thankfully that means the world is still here, life carries on, and the human race is free to experiment, explore, and grow.

The Cold War saw the development of personal computers. Technology has exploded, taking leaps and bounds into a new, digital era! We carry computers powerful enough to send a man to the moon in our pockets! And we use these devices to do all kinds of things. We talk to friends and family half a world away as though they were in the next room. We read great works of literature, digitized and uploaded for free to the web. We take classes, learn skills, and share art.

And we make memes.

We’ve gathered up some of our favourite Cold War themed memes to get you through the darker days. Because humans need humour.

Why?: A cold one sounds nice to me 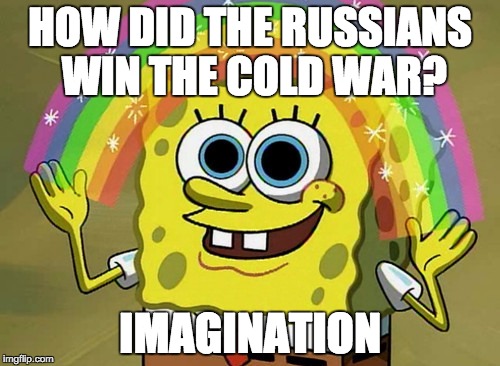 Why?: They didn’t, There is no way the USSR could have won because they stopped existing, hence they had to use their imagination.

Why?: As a child I legitimately thought the cold war took place on a cold winter a long time ago. However after watching Goldeneye I learned this was not quite right. It was my Cold War history teacher as a young fella.

Why?: Again being that I thought the Cold War was about a war taking place in the cold as a kid this is funny to me.

Runner up #2: “Itchy and Scratchy”

Why?: As I now know that the Cold War is not about a weather condition combined with warfare, I feel this photo sums it up like no other.

Sense of humour: The Clever and Absurd

Why?: It is a clever historical pun AND a cute space puppo. Who wouldn’t Laika it?

First runner up: “The bourgeoisie.”
Why?: It’s kind of bourgeois to like this joke and I find irony delicious.

Why?: It’s catchy. It’s mesmerizing. It has power. Maybe too much power.

There you have it!
Enter the Bunker’s top 9 Cold War memes, as judged totally objectively* by our team!

*read: totally subjectively, there is no system, no rhyme, no reason. Life is absurd.

See you next week!

The Cold War in a nutshell… pic.twitter.com/z6wZswR4rP

Want to learn more about the Cold War?

Memes got you curious? Just want to know what Canada did in the Cold War? Or maybe you just want to get into the bunker and have a look around! (No shame, it’s super cool in here)

THIS SATURDAY (January 19th 2019) we have a FULL DAY of bunker tours coming up! So book those tickets ASAP. You don’t want to miss this!

Drop us a line by email or follow us on social media to get the latest on what’s up underground.

Come on down underground